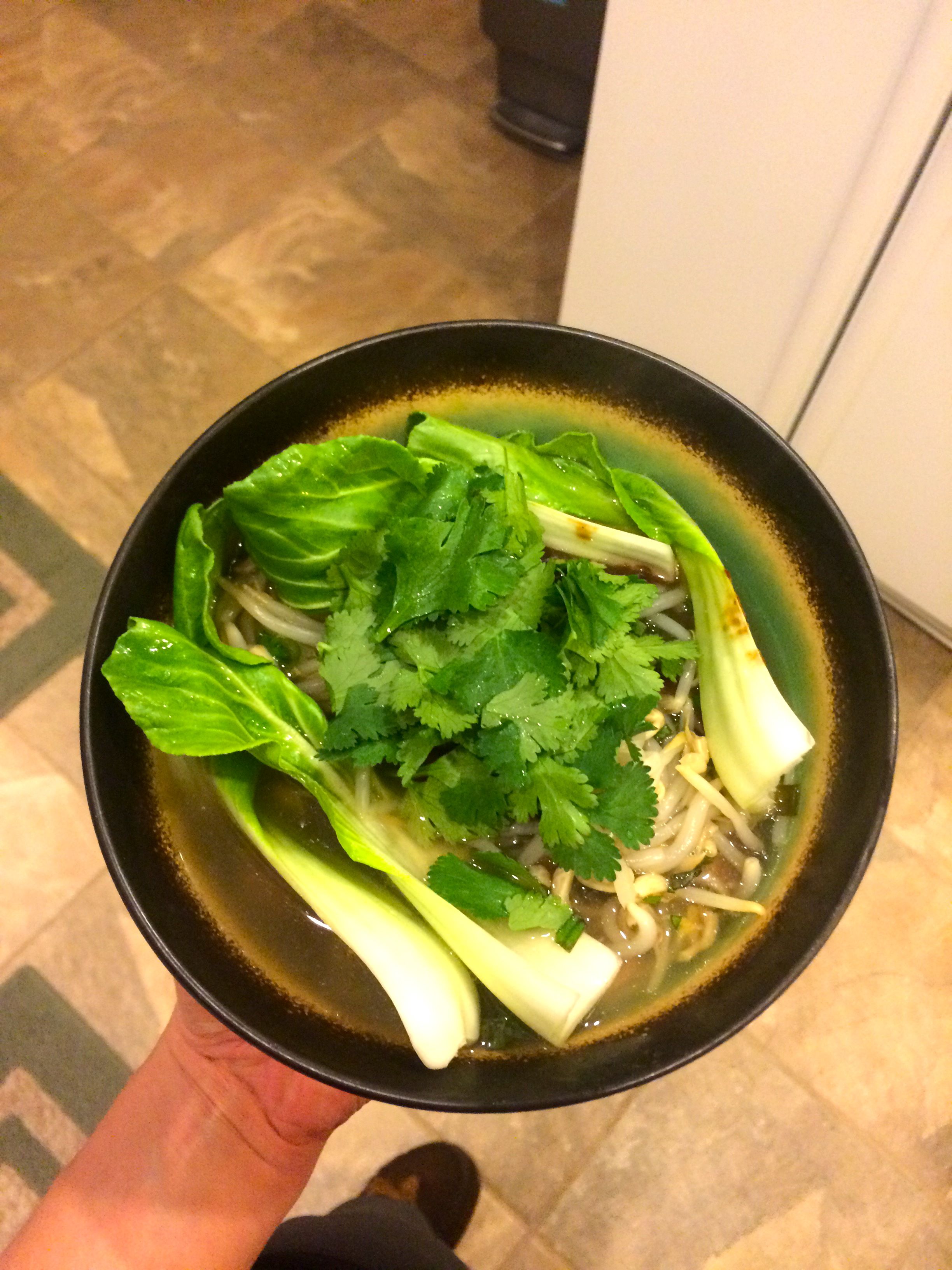 That delicious Vietnamese noodle soup. Also the word that I feel so awkward saying out loud. I commonly hear it pronounced as “foe” (very tempting), but it is really pronounced “fu” (almost like saying foot without the -ot). See that helps, right? Glad we got that out of the way. Now on to what pho actually is.

Pho, a popular street food in Vietnam, is a noodle soup consisting of broth, rice noodles, fresh herbs, meat of your choice, and several garnishes. The garnishes vary based on the region of Vietnam. Northern pho tends to have wider noodles, lots of green onion, and fewer garnishes, such as fish sauce, vinegar, and chili sauce. Southern pho is usually sweeter and with a greater variety of fresh herbs. Additional garnishes in southern Vietnam include lime, bean sprouts, cilantro, fish sauce, and chili or Sriracha sauce. From what I have read, the broth is key. Stewing for several hours of the day with beef bones, oxtails, flank steak, charred onion, charred ginger and spices, such as star anise, roasted ginger, roasted onion, black cardamom, coriander seed, fennel seed, and cloves. This combination of spices can be bought as a package deal, which includes a cheesecloth to place the spices in, at your local Asian market (which makes that part of the process very easy).

Ready for the meat sweats? Well you’re about to get ’em. Steak, fatty flank, lean flank, brisket, tripe, meatballs, chicken, or pork are the variations of meats commonly used in pho. Pick your poison. I chose beef sirloin and beef chuck, mainly because almost all butchers were closed on Sundays so I didn’t have much to choose from.

My favorite part? This…

(Charring the onions and fresh ginger over the stove for the broth) Or this. It’s a tough call…

Garnish, garnish, garnish, garnish. The options are endless. For me, it’s all about the garnishes. From top to bottom in the photo, I used basil, chili sauce, baby bok choy, bean sprouts, green onion, limes, cilantro, and sliced jalapenos. In my mind, if you have a plethora of garnishes, people can make their pho as amped up as they desire. So where did my love for pho begin you ask? One of my favorite cities…New Orleans. New Orleans suburbs has one of the largest populations of Vietnamese people in the United States, as it is one of the many places Vietnamese fled to after the Vietnam War. I can’t say I’m upset about it. Not the war of course, but the food. So how did mine turn out?

DELICIOUS. If you have not experienced an authentic bowl of Vietnamese Pho, you NEED to get on that. Or make it yourself 🙂 On to the recipe…

Start by charring your ginger and onions. Use tongs to hold the ginger and onions over an open flame, or place it directly on an electric burner. Turn until they’re lightly blackened and fragrant about 3 minutes. Set aside.

Place the beef chuck in large stockpot and add water to cover. Bring to a boil and boil for 5 minutes. Drain in a colander and thoroughly clean the stockpot. This process will give you a much cleaner broth.

Add 4 quarts fresh water back to the stockpot and bring to a boil. Transfer the meat back to the pot, along with the charred/cleaned ginger and onions. Add the scallions, fish sauce and sugar. Reduce the heat to low, and simmer until the beef chuck is tender, about 40 minutes. Skim the surface often to remove any foam and fat.

Remove one piece of the chuck and transfer to a bowl of ice water to stop the cooking process. Transfer the beef to a container and refrigerate. Leave the other piece of chuck in the pot.

Now add the spices. Remember my spices came in a package. So all I had to do was place them in the cheesecloth and string them to the handle of the pot while the cheesecloth soaks in the broth.

Continue simmering for another 4 hours. Add the salt and continue to simmer, skimming as necessary, until you’re ready to assemble the rest of the dish. Taste broth and adjust seasoning by adding more salt, sugar, and/or fish sauce as needed.

To serve, boil the noodles according to package instructions. Add to a bowl. Place a few slices of the beef chuck and the raw sirloin on the noodles. Bring the broth to a rolling boil and ladle it into each bowl. The hot broth will cook the beef. Garnish with your toppings of choice and serve!